Eliza Reid is a journalist, editor, and cofounder of the annual Iceland Writers Retreat. Eliza grew up on a hobby farm near Ottawa, Canada, and moved to Iceland in 2003, five years after winning a student raffle for a date with the man who became her husband, Gudni Jóhannesson. When he took office as president of Iceland on August 1, 2016, Eliza became the country’s First Lady. In that capacity, she has been active in promoting gender equality, entrepreneurship and innovation, tourism and sustainability, and the country’s writers and rich literary heritage. Being the spouse of the head of state is an immense privilege, full of surreal and wonderful experiences. Eliza has been candid about the role, which is an unofficial position with no job description, penning a lauded op-ed in the New York Times and delivering a TEDx Talk on the topic. Her first book, Secrets of the Sprakkar , was an instant bestseller in Iceland and Canada, a New York Times Book Review Editors' Pick, and is forthcoming or available in numerous languages.

Eliza was previously editor for Icelandair’s in-flight magazine, a staff writer at Iceland Review, and has been published in the New York Times, The Globe and Mail, Monocle, and several other newspapers and magazines. She served on the jury of the 2018 BC National Award for Canadian Non-Fiction. Prior to serving as first lady, Eliza was a frequent commentator on Icelandic current affairs for foreign media. She is a member of the Association of Women Business Leaders in Iceland (FKA) and until serving as first lady was a member of the Canadian branch of the Society of American Travel Writers. She works with Business Iceland on projects to promote Icelandic exports and the country as a destination.
‍
As first lady, Eliza is patron of several organizations in Iceland, including the Alzheimer’s Society, the Iceland Symphony Youth Orchestra, the Icelandic Culinary Team, Pieta House (for suicide prevention), and the United Nations Association of Iceland. She is a Goodwill Ambassador for SOS Children’s Villages Iceland. In 2017, Eliza was named United Nations Special Ambassador for Tourism and the Sustainable Development Goals.
‍
Eliza has an honours bachelor of arts degree in international relations from Trinity College, University of Toronto, where she held the position of Head of College in her final year. She also has a master of studies degree in modern history from St. Antony’s College, Oxford University. She speaks Icelandic and French, in addition to her first language. Eliza has four children and an adult step-daughter. 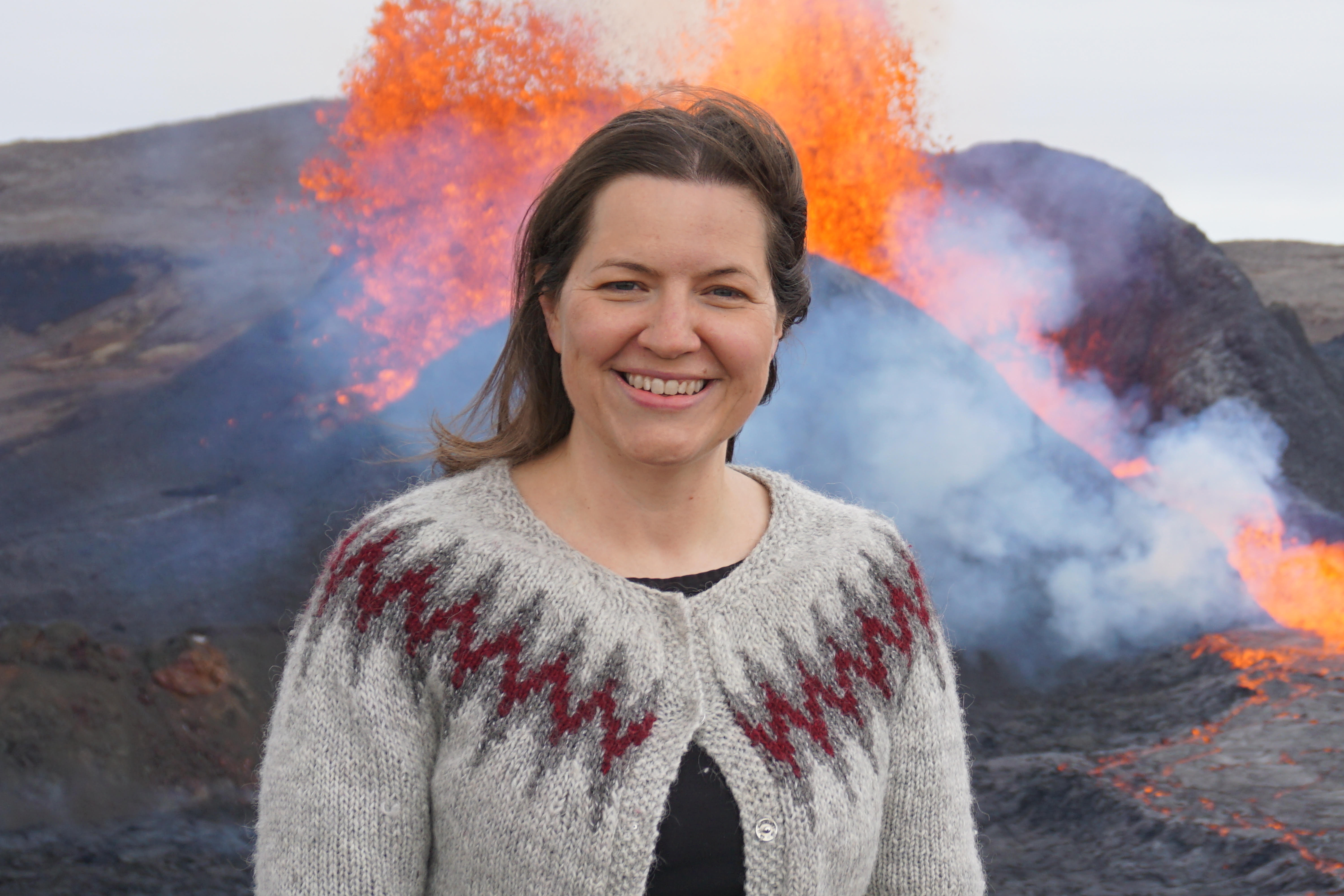 For more on the Iceland Writers Retreat, visit icelandwritersretreat.com

Iceland's Extraordinary Women and How They Are Changing the World

Iceland is the best place on earth to be a woman—but why?

‍For the past twelve years, the World Economic Forum's Global Gender Gap Report has ranked Iceland number one on its list of countries closing the gap in equality between men and women. What is it about Iceland that makes many women's experience there so positive? Why has their society made such meaningful progress in this ongoing battle, from electing the world's first female president to passing legislation specifically designed to help even the playing field at work and at home? And how can we learn from what Icelanders have already discovered about women's powerful place in society and how increased fairness benefits everyone?

Eliza Reid, the First Lady of Iceland, examines her adopted homeland's attitude toward women—the deep-seated cultural sense of fairness, the influence of current and historical role models, and, crucially, the areas where Iceland still has room for improvement. Reid's own experience as an immigrant from small-town Canada who never expected to become a first lady is expertly interwoven with interviews with dozens of sprakkar ("extraordinary women") to form the backbone of an illuminating discussion of what it means to move through the world as a woman, and how the rules of society play more of a role in who we view as "equal" than we may understand. Secrets of the Sprakkar is a powerful and atmospheric portrait of a tiny country that could lead the way forward for us all. 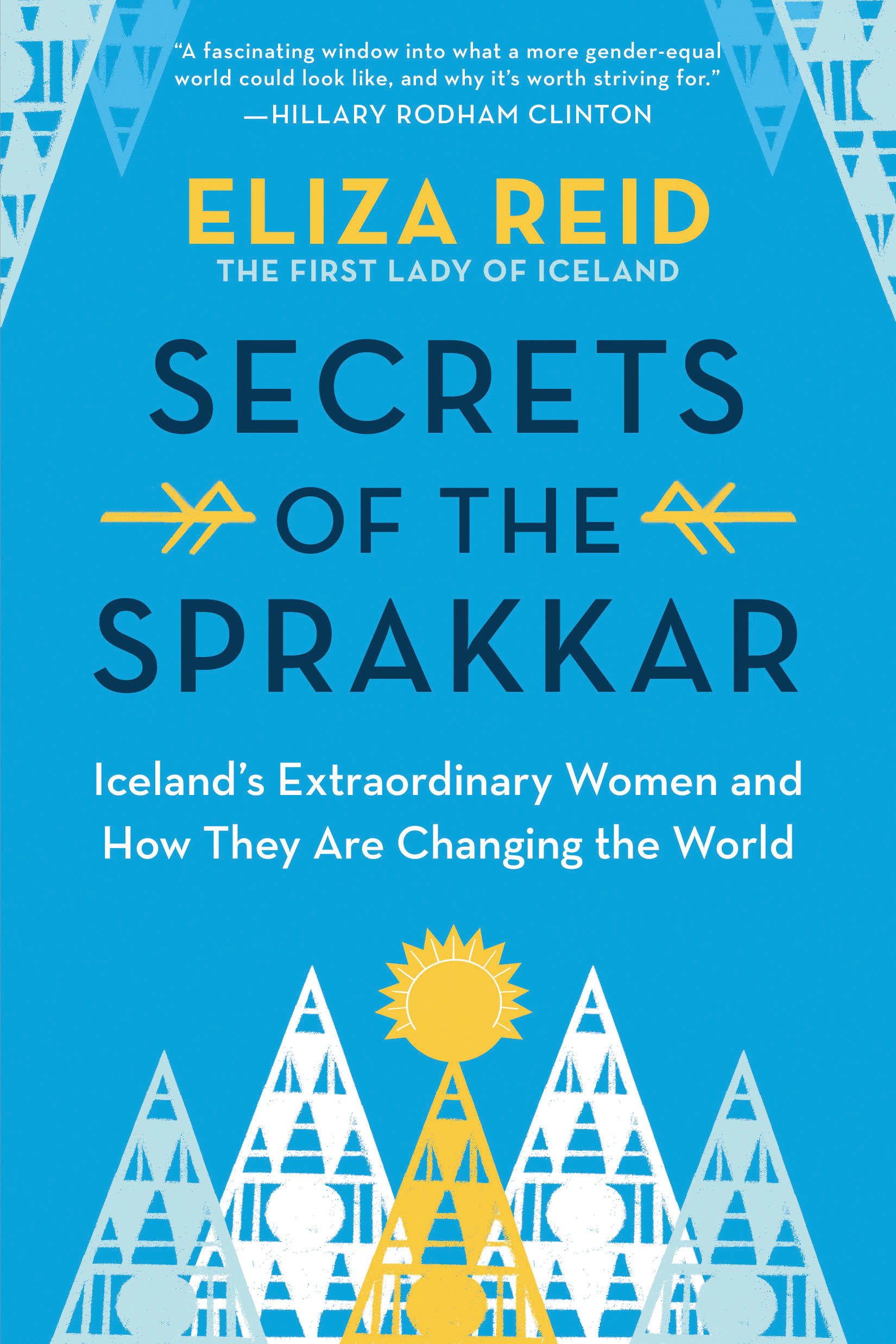 Secrets of the Sprakkar is a fascinating window into what a more gender-equal world could look like, and why it’s worth striving for. Iceland is doing a lot to level the playing field: paid parental leave, affordable childcare, and broad support for gender equality as a core value. Reid takes us on an exploration not only around this fascinating island, but also through the triumphs and stumbles of a country as it journeys towards gender equality.”

Secret of the Sprakkar is available through these sellers.

Praise for
Secrets of the Sprakkar

With warmth, wit, and insight, First Lady Eliza Reid explores the reasons why Iceland is one of the best places on earth for women, as well as the challenges still ahead in achieving full gender equity. Secrets of the Sprakkar is an illuminating, inspiring, and absorbing book about how a more equitable society could elevate us all.”

The fact that the Icelandic language includes the word ‘sprakkar’—an ancient term that translates to mean ‘extraordinary women’––in its lexicon tells you a great deal about the country of Iceland. And in her marvelous memoir, Eliza Reid tells us a great deal more: not only about her life in Iceland, but also about gender equality in action, and the sense of purpose that all of us seek. This is a charming and necessary book.”

Everyone who visits Iceland quickly learns that the little country contains some of the world’s most extraordinary women, their lives rooted in a social and political culture that nurtures equality between men and women without ignoring the pleasures and complexities of family life.  It’s a pleasure to see that culture marked out for us through the sometimes wry but always beautifully personal and perceptive lens of the remarkable Eliza Reid.”

Adam Gopnik
Author and staff writer for the New Yorker
“

Charting her own love of the nation and her journey to becoming its First Lady, alongside histories of other formidable women, Eliza Reid’s Secrets of the Sprakkar sheds light on Iceland’s unique approach to gender equity—an emblematic look at what’s possible in the fight for women’s rights worldwide. A fascinating, hopeful, and inspiring read.”

A warm and intimate exploration of what one small country can teach the world about gender equality. Eliza Reid charts her personal journey from a Canadian farm to Iceland’s Presidential Residence and along the way proves to be the best possible guide to the historical, geographical, and cultural factors that helped women thrive and built a vibrant modern society.”

What a world of possibilities Eliza Reid unveils in this warm and wonderful book! It made me want to pack my bags and move to Iceland.”

Ruth Reichl
Author of Save Me the Plums 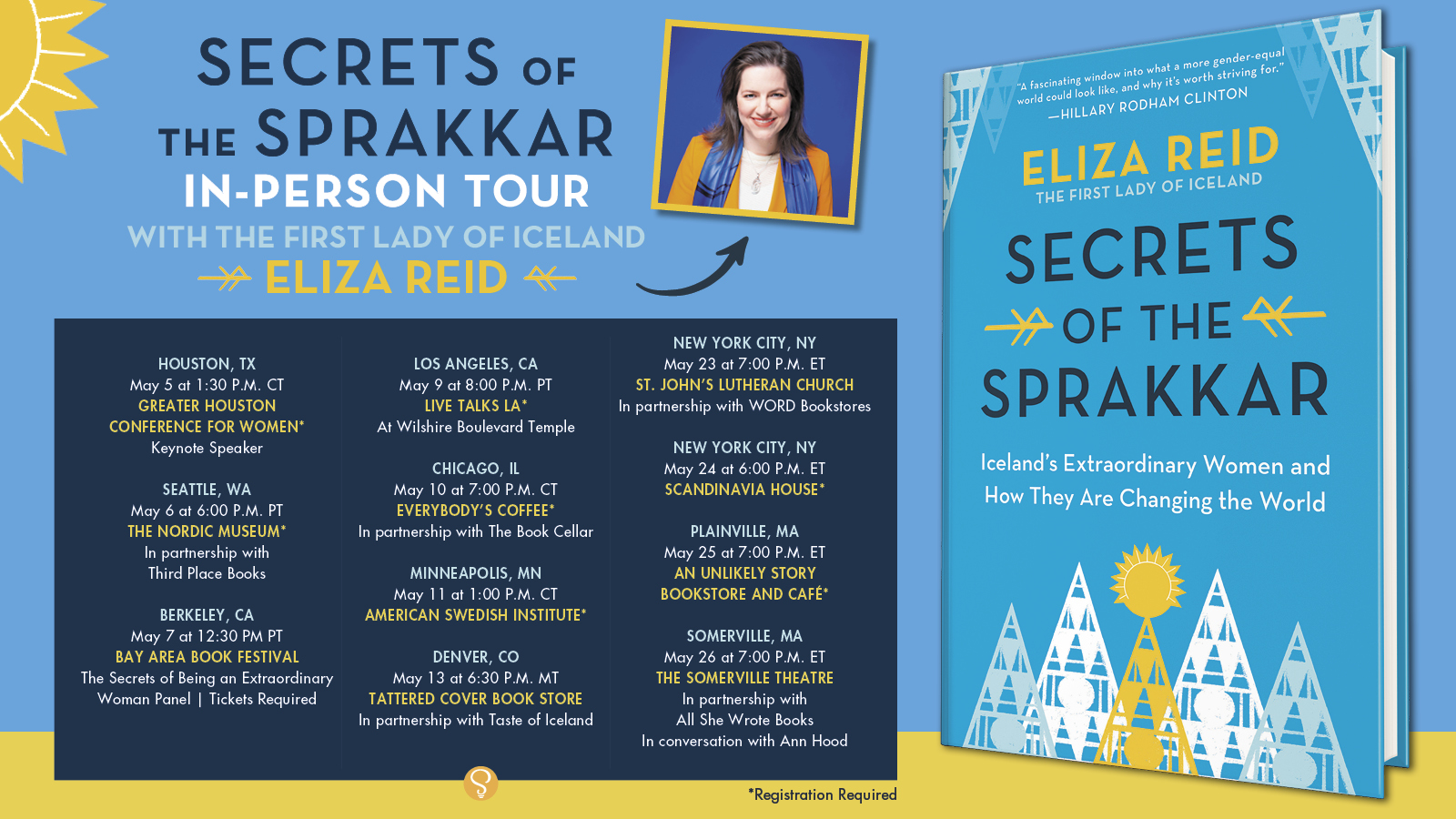 Come and say hi at one of my in-person stops in May! 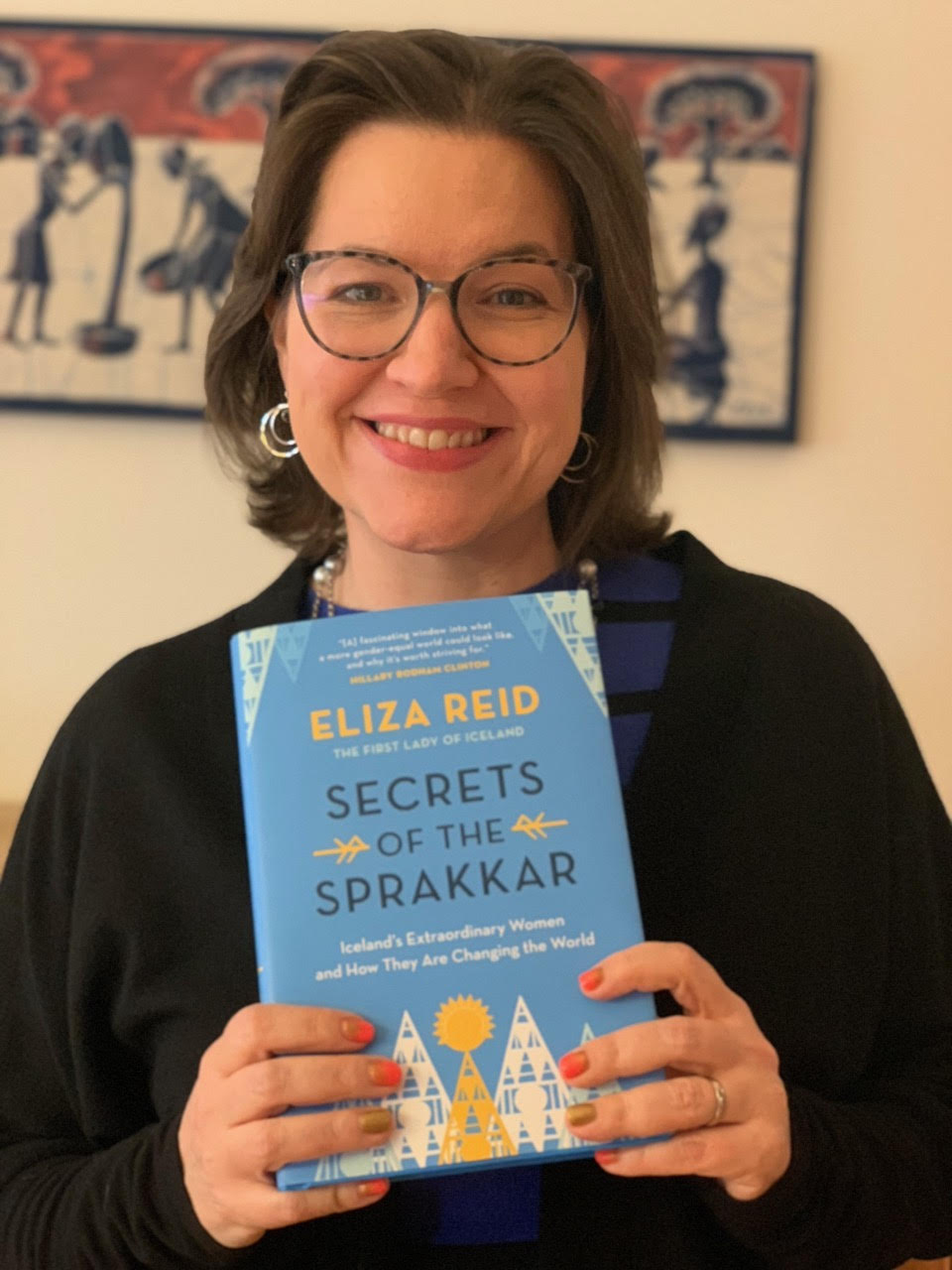 Secrets of the Sprakkar an Instant Bestseller in Canada

Secrets of the Sprakkar debuted at #9 on the Canadian Non-Fiction bestseller lists of both the Toronto Star and the Globe and Mail after its publication.

Some Canadian press and interviews are here:

The Kit, Feb. 3, 2022: “The book is peppered with lively personal anecdotes about Reid’s life as first lady, interviews with notable local women, and observations about daily life in the beautiful country . . . It’s interesting to hear so directly and unguardedly from an active first lady.”

Toronto Star, Jan. 28 2022: "This is, on one level, a deeply personal story. ...  Reid’s voice is engaging and interesting, and she peppers the story with her own discoveries of how the country and the idea of gender equality worked." 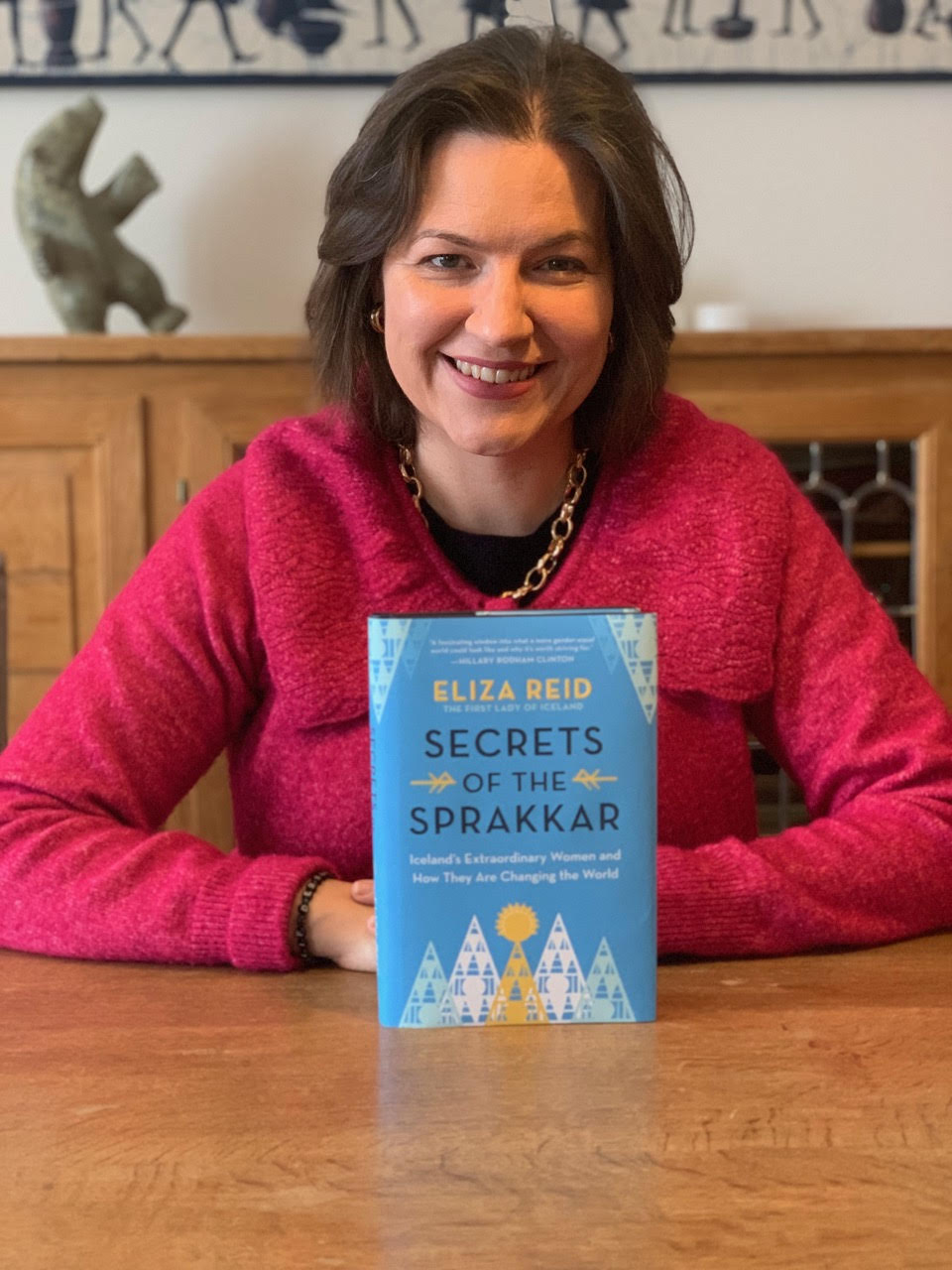 ‍
New York Times review by Cindi Leive: "Reid’s story is riveting in and of itself."
‍
Washington Post review by Jane Smiley: "I enjoyed it so much ... Reid's style is amusing, her thoughts are honest, and the issues she discusses are becoming more important by the day."

Further links below, including profile in the Boston Globe and interview with NPR's Morning Edition 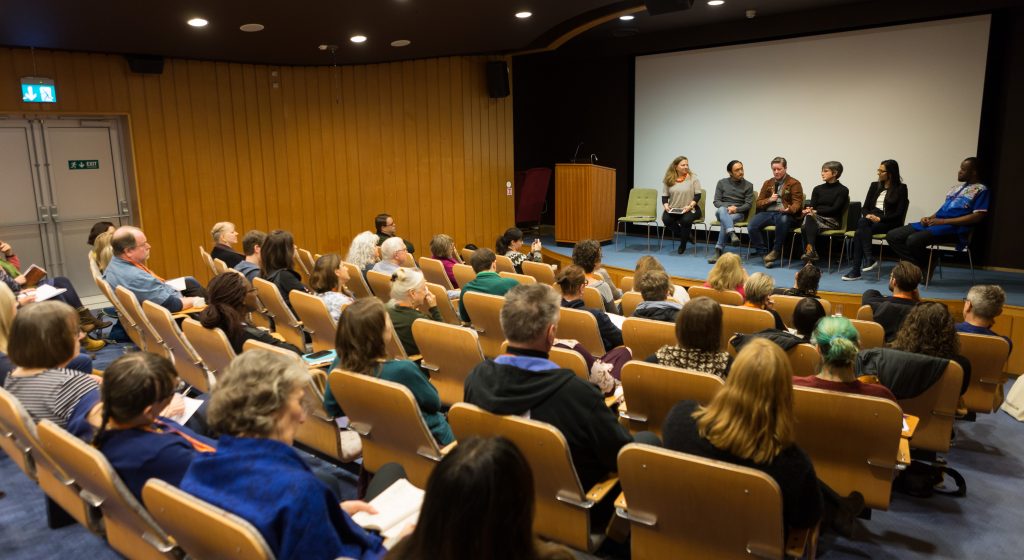 All about the Iceland Writers Retreat

Eliza founded the Iceland Writers Retreat with Erica Jacobs Green. The first event was held in 2014. It will run from April 28 to May 1, 2022 in Reykjavík, concurrent to the very first Iceland Readers Retreat. Next year's event features authors including Gretchen Rubin, Patrick Gale, Elnathan John, Yrsa Sigurðardóttir, David Chariandy, Aminatta Forna, and Cynthia d'Aprix Sweeney. The featured author for the IRR is Adam Gopnik. Visit our website for more information or to register. 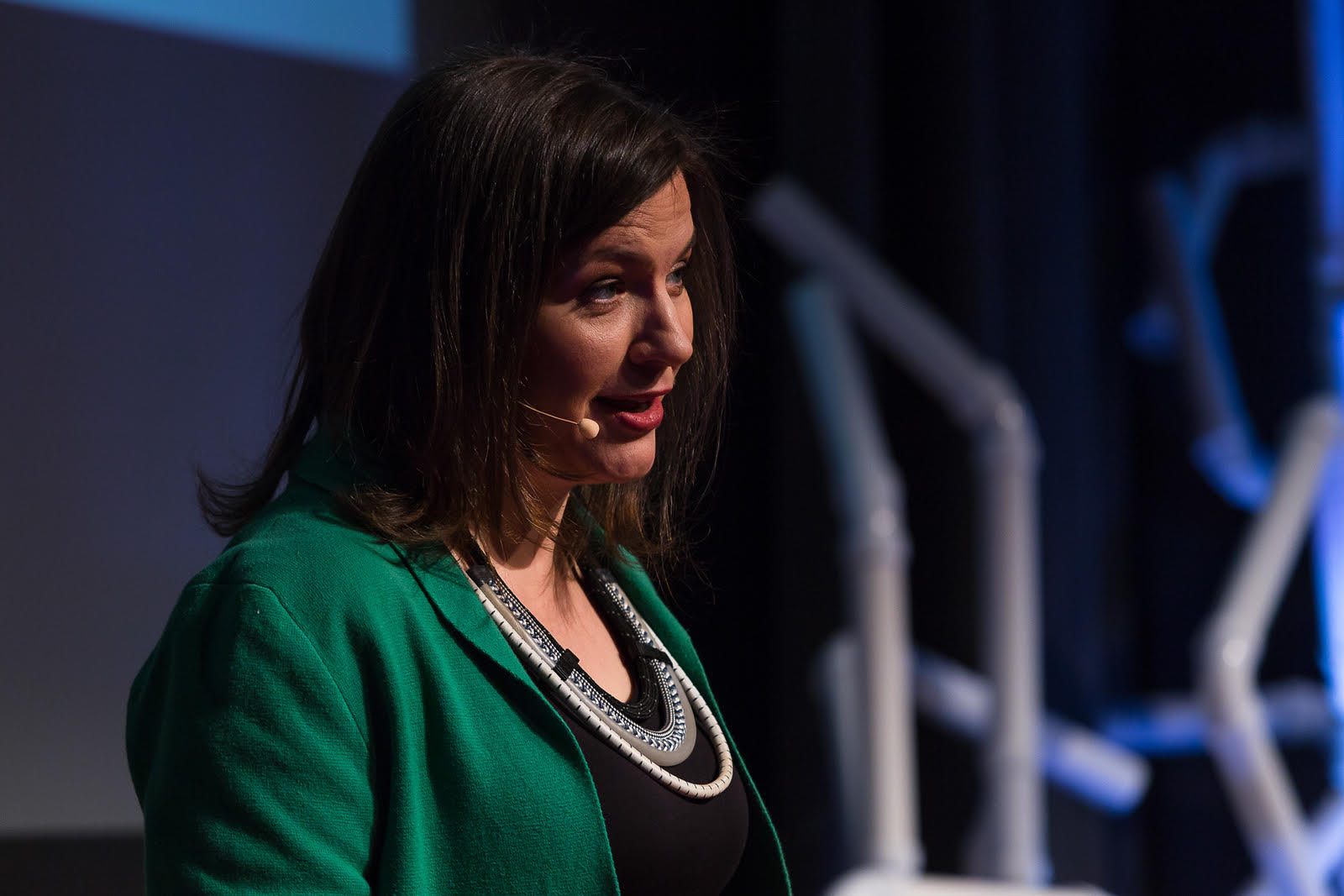 Pulling Back the Curtain: Life as a First Lady

Eliza talks about the surreal moments that led to becoming First Lady in the most gender-equal country in the world, navigating her highly visible but undefined and unofficial role. There are joys and opportunities as well as challenges of becoming primarily known as someone’s spouse, and the outdated assumptions that go along with that. A talk for anyone who wants to make the most of unexpected twists of fate, defy expectations, and stay true to one’s own goals even when your life partner often holds the spotlight. 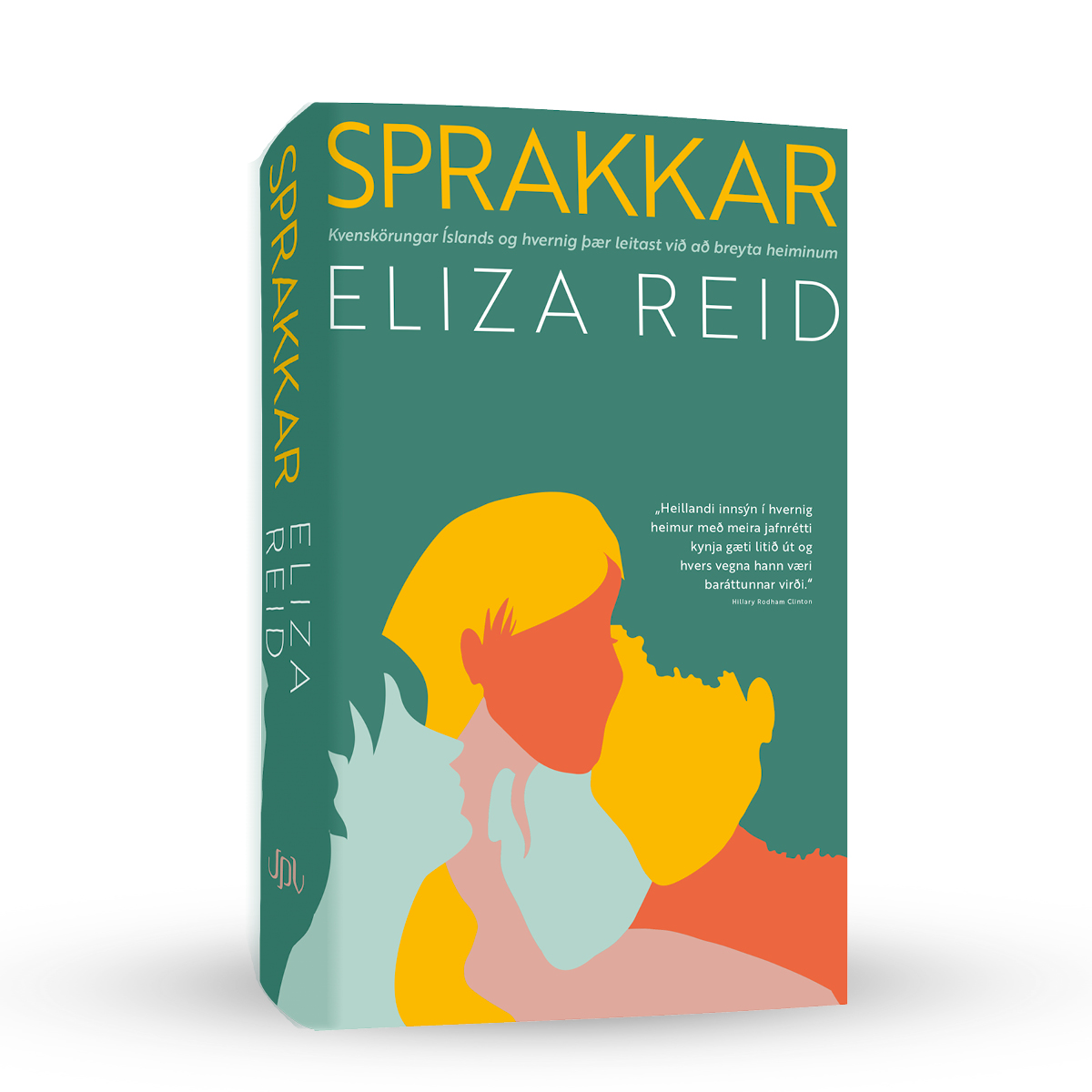 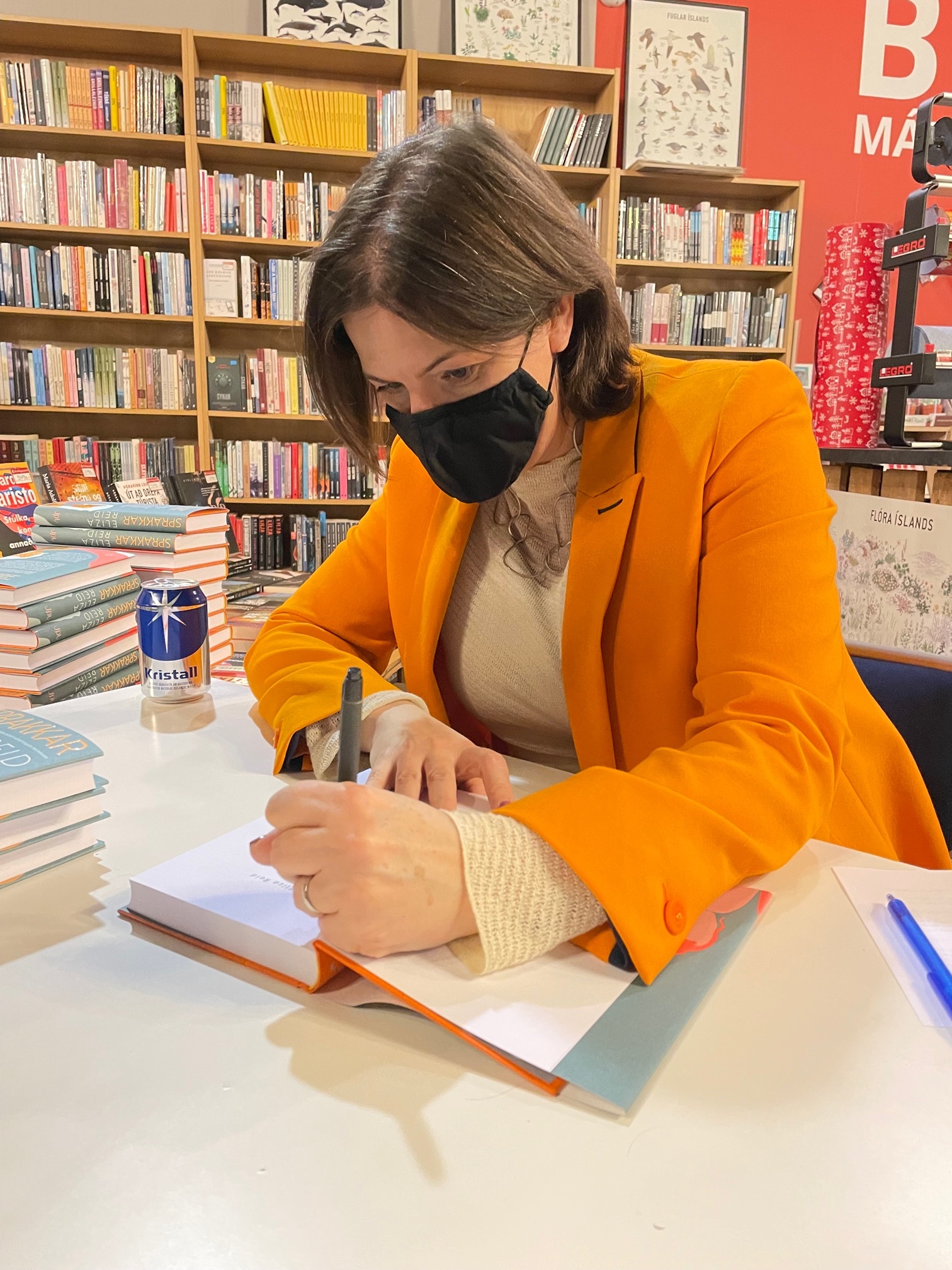 Great review in Publisher's Weekly for Secrets of the Sprakkar: [my emphasis in text]

"Reid, a Canadian who is married to the president of Iceland, combines memoir, feminist history, and travelogue in this immersive look at what makes her adopted home “the planet’s finest country for women.” Sprakkar, in the title, refers to an ancient Icelandic term for “extraordinary or outstanding women,” among them former president Vigdís Finnbogadóttir, the “world’s first democratically elected female head of state” in 1980, and Jamaican immigrant Claudia Ashanie Wilson, who in 2016 became the first foreign-born woman to pass the bar exam and qualify as a practicing attorney in Iceland. Reid also recalls meeting her future husband, historian Gudni Jóhannesson, while studying at Oxford in 1998, and recounts his meteoric rise to the presidency after the 2016 “Panama Papers” scandal implicated the country’s prime minister and cabinet members. Throughout, Reid reflects on Iceland’s history, generous parental leave policy, and strengths as a nation of less than 370,000 people (“change is easier to demand, to implement, and to measure”), while offering an intimate look at her career and life as a mother of four. Laced with frank discussions of domestic abuse, intersectionality, and other complex issues, this is a winning portrait of a country at the forefront of the fight for gender equality."

For the latest information on events and public appearances, please visit Eliza's social media, especially Instagram and Facebook (see above).

For all Canadian media and events requests, please contact: sscanadapublicity@simonandschuster.ca 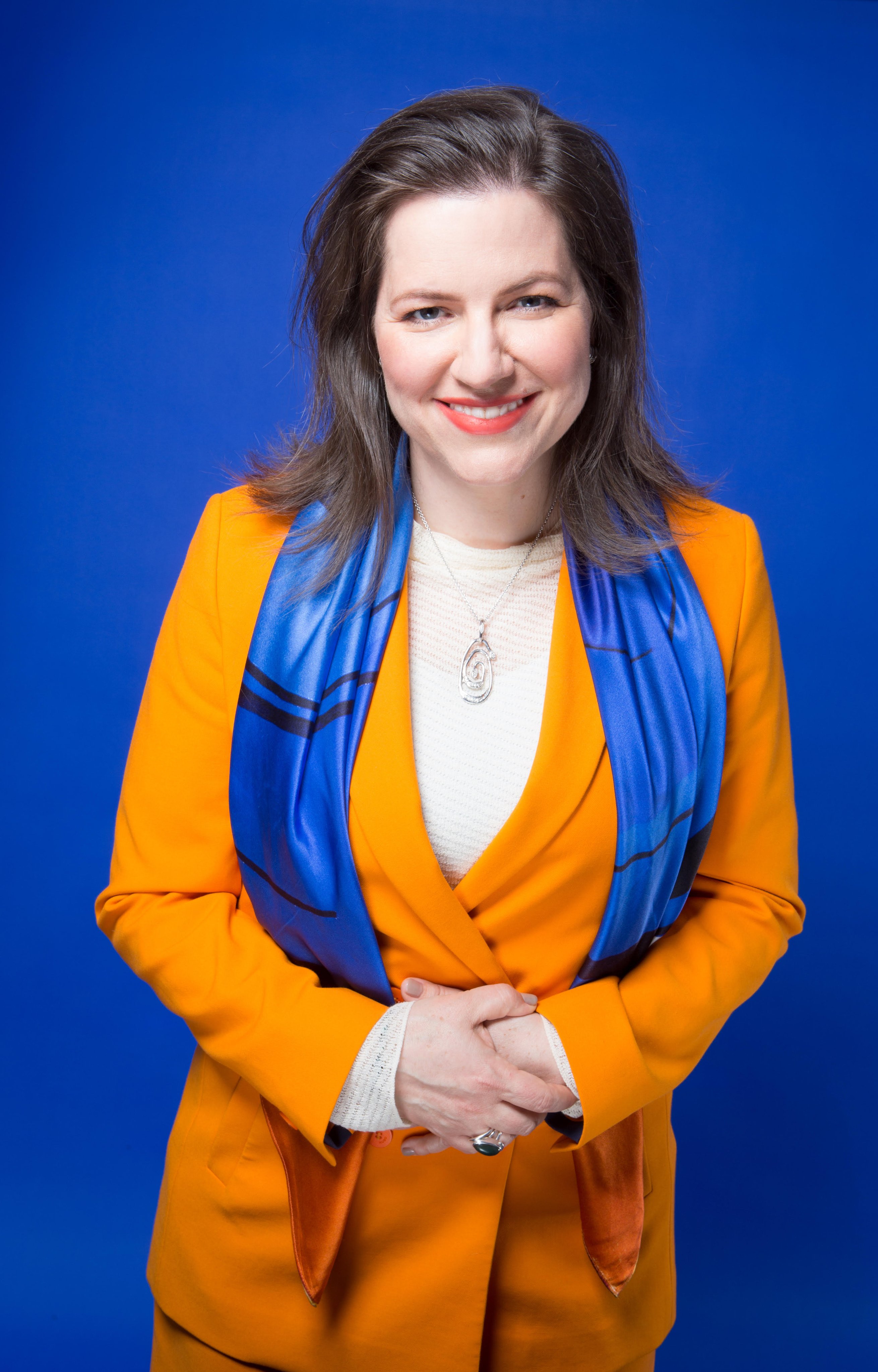